This is a common issue on the 4 series convertible and on the M4 Vert so I thought it might be helpful to document this and post up the solution for anyone searching for it.

SYMPTOMS
Noticeable sound of water sloshing around inside the body of the car. The problem can also lead to the HK Amp in the boot being water damaged and requiring replacement.

CAUSE
The rear quarter panels have a series of drainage chambers inside that are designed to take water from drain pipes linked the the gutters on the roof that house the roof hinges and guide it out underneath the car. See below (this is the same for both side of the car). 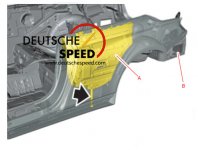 Loose or perished rear window seals allow water run-off from rain and/or washing to fall into these chambers (A) and rapidly fills them up. The factory designed drain outlet underneath the car cannot cope with the level of water ingress and due to it's design, it frequently becomes blocked up with dirt and debris which in turn causes the chambers to fill up with nowhere for the water to drain out. Eventually the water overflows and spills out into other areas such as the ventilation ducts at the rear of the boot (B), most notably the boot area with the Harmon Kardon amp is located. This leads the amp to be water damaged and requiring replacement.

On the M4 the issue is further exacerbated as the underside of the M4 side skirts cover the drainage holes and further prevent the water from draining away.

SOLUTION
There is an official BMW TSB for this (attached to the bottom of this post). On the M4 the underside of the side skirt should have a hole drilled in it to allow the passage of water from the drainage outlet not to be obstructed but the main fix is to remove the drainage channel insert underneath. This can be accessed by removing some of the underbody cover and is a reasonably easy DIY. You can gain access to it simply by removing some of the fixings that hold the covers in place. The drainage insert has a female hex socket shape that allows it to be turned and released by an Allen key. In order to fully solve the problem most BMW mastertechs go further than the TSB and instead of cleaning and replacing them, they discard them altogether. This is what I have done personally and have never experienced any further problems.

You can see a few videos on youtube of owners who have had this problem and you can see just how much these drainage chambers can hold.

If required you can replace the rear window seals but these will simply loosen up again over time, however with the drainage inserts removed, the water will simply and quickly drain back out from the bottom of the car so this step isn't necessary to solve the problem.

Thanks for posting this. It's greatly appreciated as I am having this issue with my car.

Starlord69 said:
Thanks for posting this. It's greatly appreciated as I am having this issue with my car.
Click to expand...

No worries mate. That's exactly why I posted it up as I had to scrabble around for info. The indy dealer that I bought mine from told me that they had applied the fix but they hadn't. The good news is that after I completely removed the insert the problem never ever came back again.