You get what you pay for

I'm no stranger to taking a gamble on some far-east carbon. Especially when you consider that must OEM carbon is made there anyway. If I can get a decent piece at a budget price I tend to go for it but sometimes you've no choice but to pay big prices.

Anyhoo... I was thinking about the Stercken Carbon inserts for the front of the M5. Wasn't sure about them though and how they've interface with the M Performance bits on the front. Found a listing for a couple of knock-off bits on ebay for a just over a hundred quid. The genuine Stercken ones are about four times that. At a hundred-odd quid I thought I'd take a punt.

Here's the photo's from the listing: 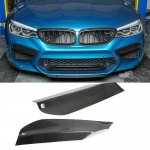 Notice the cut out section for the towing eye cover. Also the bottom edge is designed to marry up to the top of the M Performance inserts. I've photos of cars with both and thought it might make the front intakes seem larger in the same way that the LCI does.

This is what they sent me! 😄 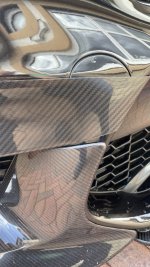 After that they tried to trick me into accepting a £20 refund to close the "not as described" case I opened up, saying that it was to cover the return postage. If I'd accepted, Id have been stuck with these and a £20 refund. When they realised I wasn't that gullible they just refunded the lot and shut the case with no further dialogue so in the bin they go!

And I wish the real ones were only four times as much!

Bought a boot lip spoiler from Taiwan. £50 painted. Arrived coiled up in a 'pizza' box. 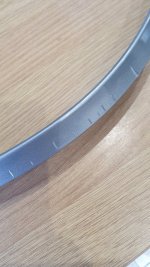 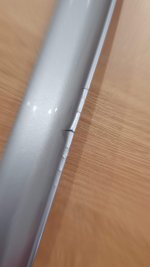 "Sorry sir, the reason it's creased and split is because we send them coiled up in a box" No shit!

I asked for a refund, they said they'd send another out in a straight tube, so I thought I'd humour them.....

Needless to say, they're now giving me a full refund. Shame really as the colour match is spot on.

I've bought loads of dustbin lining carbon fibre over the years, I never learn, but the force is strong with Chinese cut price Snides.