Oh that’s very nice in deed, congrats, you need a photo shout with Boba, you guys don’t mess about, hope you enjoy they get great reviews 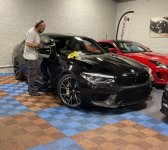 Excited for you, it really does look fantastic.

Been sitting watching YouTube videos of them all night. Don’t think I’ll get much sleep tonight!
Last edited: Sep 10, 2021

I’m away in St Andrew’s for my wedding anniversary so content will be scant till Sunday but having driven it up here all I’ll say is:

moonstone said:
I’m away in St Andrew’s for my wedding anniversary so content will be scant till Sunday but having driven it up here all I’ll say is:

Tell Mrs Moon to sit in it and the photo is of her. Then just zoom out

Awesome, so pleased for you. Happy Anni

How good does this look??

Got back from St Andrews this morning and had a fart about with the car and also a proper chance to stretch its legs without the Mrs in the passenger seat. The power of this thing is like nothing I've experienced before. It's the fastest car I've ever been in. The speed and how quickly it builds it mind-boggling. I didn't get a chance to fiddle with the settings and really hammer it during my test drive but did that today and MY GOD. I knew it was quick from the videos but it defies belief that something this big and heavy can move so fast.

During the last couple of says I really struggled to get comfortable in the drivers seat. Its taken me ages but I finally cracked. The head-rest just seemed to stick out too much but, I finally cracked it when I tilted the seat base how I like it.

After that I decided to stick on my new exhaust pipes: 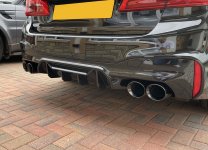 Then I had a go at fitting the LCI rear lights: 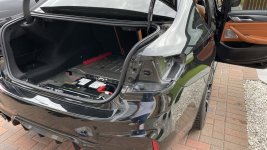 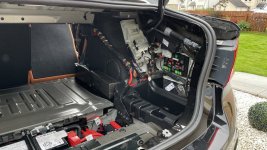 But this wasn't to be unfortunately as I I need to suss out the coding. I had hoped to have a play around with it using Bimmercode but for some reason I couldnt access the BDC module. Have sent an email to Bimmercode for support on this. Having read up on what's required, I'll need a bit of help with that one one I think, so Put the car back together again and stuck the original lights back on for the time being.

After that I decided to give the Display Key a tidy up. Wasn't really much to do to the car in terms of cleaning as it was prepped to a really high standard. I did polish out some small scratches on the glossy part of the centre console and steam clean the leather. The steering wheel as a bit of wear so there's a replacement on order from Royal Steering wheels. Couple of wee scratches on the Carbon effect trim on the centre console that's annoying me a wee bit so I may replace that. 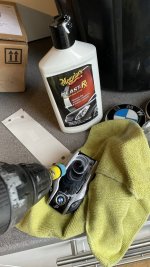 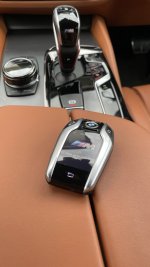 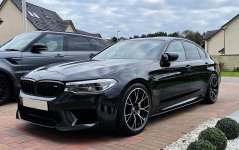 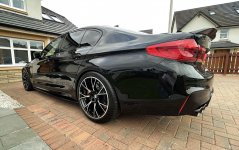 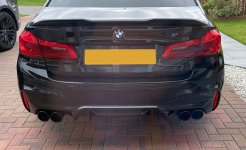 Got some carbon bits on order that should arrive over the next few days but other than that, there's not much on the agenda for this one.

Glad you like it and everyone is surprised how powerful it is, which makes the next car a difficult choice mate!

A passenger thought it was a good idea to chuck some coins on the sliding carbon effect charger door on mine and put a small scratch in it, so will be swapping that out at the brake service next month too.

Can’t wait to see it all finished mate!

Looks fat that. Bet you couldn't wait to make a start on it and stretch its legs, did you get "all you want to do is get back and tit around with your new car"
S

Love the interior colour combo with the black exterior.

A proper big grown up piece of kit. Looks lovely.

boba fett said:
Looks fat that. Bet you couldn't wait to make a start on it and stretch its legs, did you get "all you want to do is get back and tit around with your new car"
Click to expand...

LOL! Pretty much but to be honest, she’s pretty good at not giving me a hard time about it.

A proper big grown up piece of kit. Looks lovely.
Click to expand...

To be honest that’s exactly what it feels like to me. Also have to agree on the colour-way. The in-your-face leather coupled with the muted exterior was definitely a factor for me.
J